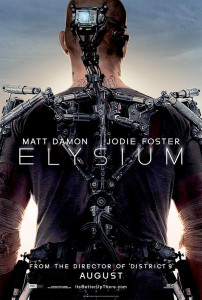 Society has been broken down into two factions: the haves on Elysium and the havenots on Earth. Matt Damon, a man trying to put his life in order, is doused with a ton of radiation and now has days to live. Desperate to get to Elysium, Matt basically sells his body to some bad men for a ticket to the floating paradise in the sky. Things do not go as planned and Matt Damon winds up being the key to saving the world.

“Elysium” was not entirely what I expected, which is not a bad thing by any means. I have watched movies before believing they were going to be about one thing only to be shocked to find that they are about something else entirely. It can ruin a movie. Thankfully it did not with this one. Now don’t get me wrong, while the overall plot of the movie is about a man trying to get to Elysium to save his own life, the trailers leave out another HUGE plot point that pretty much drives the entire movie. While I was a little confused at first by this, once I settled in to this new macguffin the movie just takes off and never really lets go. Matt Damon rocks the movie and shows why he is one of Hollywood’s leading actors. I’m really happy they didn’t go with Eminem, who was their first choice to headline this movie, because I just don’t feel it would have worked with him in the lead. My only real issue that I had with the movie was with Elysium, or the lack thereof. Everyone wants to get to Elysium and while it looks like a fantastic place to live, you never really get a feel for that diamond in the sky and you never really get a decent taste of it. It didn’t ruin the movie for me, but I would have liked to had more of it just so I understood the desire by everyone to be a part of it. In the end, the movie is a great flick with some deep underlying themes that are present in today’s society. It wasn’t as fantastic as I hoped it would be, but it got the job done and gave me a chance to forget my worries for a couple of hours.

The trailers for this movie drive the idea that the suit that is attached to Matt Damon will give him the power to change the world. I am going to tell you this right out of the gate – that is not the case. As I said earlier, there is a huge plot element that is completely ignored by trailers and seems out of left field when it is introduced in the movie. In order to understand what I am talking about, let me start from the beginning and explain to you the first thirty minutes of “Elysium” just because it will be easier to then delve into my review.

In the movie, the world has turned to hell and the rich and powerful have moved to the floating palace known as Elysium. Those who reside on Elysium are considered “citizens” and only citizens can partake in all of the awesome things that Elysium provides including a device that can cure everything. If you are not a citizen then you basically are shit out of luck and are stuck with whatever terrible disease or disorder you have. Matt Damon plays Max, a man who is trying to turn his life around after years of being on the wrong side of the law. Despite his checkered past, he has secured himself a decent job building security robots for the Armadyne Corp, a huge corporation whose largest contract is with that of Elysium. In a nutshell, Elysium is only afloat and safe because of Armadyne Corp. In a sad turn of events, Max is doused with a lethal amount of radiation and is given only days to live. Knowing that his only salvation is on Elysium, Max sells his body to Spider, a local kingpin who has made a fortune smuggling people illegally into Elysium (a little far fetched, but I went with it for the sake of the movie). Willing to do whatever it takes, Max agrees to do two things for Spider: let him to attach a exoskeleton to his body that will make him both stronger and faster, and implant a device directly into his brain that will allow him to  literally link up and download personal information from any citizen of Elysium. Remembering just how cold the John Carlyle, CEO of Armadyne Corp, was towards him after his poisoning, Max chooses Carlyle as the target of their illegal download.

This is where things take a crazy turn.

While all this is happening on Earth we find that there is a huge power struggle on Elysium between Delacourt, the Secretary of Defense of Elysium, played by Jodi Foster, and the President of Elysium, President Patel, played by Faran Tahir. The basic idea is that Delacourt feels that Patel is not a strong enough leader and believes that she should be in fact in control of Elysium. To make a long story short: Delacourt has Carlyle design a computer program that will basically reboot Elysium’s main system – allowing Delacourt the chance to name herself as the new President. Of course Carlyle downloads the program onto his trusty brain drive, which is then stolen by Max. Now desperate to get that program, Delacourt assigns Kruger, Delacourt’s main henchmen, the task of finding Max and retrieving the information. From that point on it is a race against time as Max attempts to elude Kruger while still trying to find a way onto Elysium in order to save his own life all at the same time that Spider is also trying to get the information because the program can help bring balance to the world and make everyone on Earth a citizen of Elysium.

Now breath. If you need to, reread the plot above to understand what is going on. 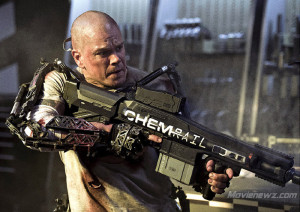 Now that you know the basic plot of the story, let me jump into my review. None of this is shown in the trailers. Nowhere did I ever see this idea of a program that will reboot Elysium’s mainframe. From the trailers I always thought that it was the suit that is attached to Matt Damon that will bring on a great change. No, it’s the program. While I dug the idea  to an extent, I have seen it before. Though no one will ever remember it, Keanu Reeves was in a really terrible movie called “Johnny Mnemonic” in the mid ‘90s, which basically had the same plot involving the cure of some disease that is downloaded illegally into Keanu’s head. The same basic thing happens from that point on – everyone wants his head and he trying like hell to get it out or he will die. The only difference is that it was done on such a shitty level in that movie that it doesn’t even matter if this movie takes the basic premise and reuses it. Either way, this movie is far better.

My biggest problem with the movie is Elysium. Everyone talks about how fantastic this place is and how everyone wants to get to Elysium but you never really get to see this place. Yeah, you see a few villas and a park I guess, but the majority of the time  that you are on Elysium you are inside some military facility and you never really get to experience it. I mean, the movie is called Elysium. I really wanted it to feel like it could be a real place to live so I could understand the desire to be apart of it, but you never get the chance. I guess it brought a bit of realism to Elysium seeing that everyone wanted to get in but no one really could. In the end I wanted to feel the awesomeness of that place so I can say “Okay, I see what the fuss is about”. Sadly, I never did.

Plot points aside, the movie is only successful because of it’s cast. Matt Damon has never really done wrong in my eyes (even “Behind the Candelabra”). He rocks this movie out and seems to really have a good time playing the conflicted hero who wants to do good but really just wants to save his own life. There is only one negative I have about the character and it has nothing to do with Matt Damon. There is one moment in the movie where his character does something incredible selfish and comes off like a complete asshole. This is a similar act that the main character in “District 9” did. Honestly, I could have lived without this seeing that Blomkamp did the same thing before. The whole thing wasn’t really needed in my opinion. I guess it was done to show the characters growth over the course of the movie, but I felt they could have done something else to help show his growth and development.

Jodi Foster usually is a guaranteed great performance, but she wasn’t in this movie. I don’t know if it was her character or not, but something just didn’t mesh well and she simply did not work. I am not going to say her role was terrible, but something was missing that hindered her from taking that next step into being a solid antagonist. I really felt she was just a boring character who had a weird accent and was incredibly snooty. I am not sure if they wanted her to be somewhat sympathetic of a character or not towards the end of the film, but whatever it was, it just didn’t work.

Sharlto Copley popped onto the scene in Blomkamp’s “District 9”. He was great in that movie and has thankfully found his footing in Hollywood. Here, Copley does something that he never really did before – he plays the main villain of the movie and I can say with absolute certainty that this man ruled this feature. I will even venture to say that he was better than Matt Damon. Yup, I went there. Every time he was on screen he just ate it up like it was biscuits and gravy. The man oozed slime and when the time came to step it up, he did. He was creepy and threatening, which is funny because if you saw him in “District 9” there was nothing about him that was threatening. That is how you know he is a great actor because he really was something else in this movie. At no point did I think to myself, “I can’t take this seriously. He was such a tool in ‘District 9’”. No, whenever he was on screen I was just waiting to see what kind of crazy out of this world shit he was going to perform. Bravo Mr. Copley! Bravo!

“Elysium” wasn’t the amazing science fiction blockbuster I was looking for, but it still was a solid feature film. The macguffin had been used before, but this movie wasn’t just about that. This movie showed us what we may have to look forward to in the near future. I truly believe what was shown in this movie can happen to us if we continue on the path that we are on. Hell, it’s happening now. Our world has already been separated into the haves and the havenots. This movie just decided to take it a step further. The underlying themes are true issues that we see in today’s society and I liked how Blomkamp incorporated them into a thought provoking science fiction film. The movie was not perfect as a whole but it was a great action flick with thoughtful commentary on present day social issues.