I remember randomly surfing movie news sites back in 2005 and stumbling upon one picture that got me so excited I ran into my brothers room to show him. One stupid, simple little picture. It didn’t really show anything, but it was more than enough to get us interested. Behold. 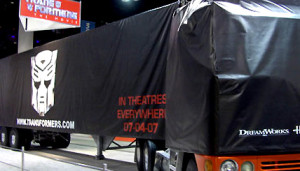 I had heard a little bit about a live action movie, and this was my, ‘wow, this is actually going to happen’ moment. My brother and I were HUGE fans of the cartoon growing up. We had toys, lunch boxes, everything we could get our hands on. I even had an Optimus Prime sleeping bag! Yep, I was one popular kid at slumber parties. My point is that I was very excited to see these robots come to life.

I later found out that Michael Bay was directing, but that didn’t bother me at the time. I enjoyed Bad Boys and Armageddon, and honestly, how hard is it to make a good Transformers movie? I knew going in that they would change some of their alternate forms, and I was okay with that. Jazz couldn’t be a Porsche, but hey, at least he was a sports car. Bumblebee was no longer a Beetle, but he was still yellow. Optimus was a boss and Peter Cullen did his voice. I could deal with the adjustments!

The first movie finally came and I enjoyed it. The casting left a lot to be desired, and the story wasn’t anything special, but it didn’t have to be. This was about robots fighting robots!! It introduced the Autobots, gave each a bit of character development, had them fight Decepticons and winning in the end. Megatron was a great villain, Starscream was perfect in his role as second-in-command, and overall it served its purpose to introduce us to this Transformers universe.

They did a decent job of balancing the setup with solid doses of CGI action. With the ‘origin story’ out of the way, things were set up for the story to take off in an all-out Autobots vs. Decepticons war. Starscream returned to Cybertron to recruit an army, Optimus put out a call for additional allies to join him on Earth. As Jim Ross would say, business was about to pick up.

And then Transformers: Revenge of the Fallen happened. Let’s break it down.

1.) “GIVE ME YOUR FACE!” – Watching Optimus absolutely destroy The Fallen and Megatron within a matter of seconds was one of the greatest moments of the series. It took him one minute and 27 seconds to defeat two of the strongest villains in the galaxy, and he ran his mouth the entire time. “They were your brothers too!”, “You picked the wrong planet”, “I rise, you fall” (get it? The Fallen? That Michael Bay is a genius).

2.) Jetfire + Optimus = BADASS! – Giving Optimus a jetpack was brilliant. Actually, pretty much everything in this movie having to do with Optimus falls into ‘The Good’ category. And he’s dead for most of the movie. So there ya go. Explains a lot, doesn’t it?

3.) Starscream & Megatron’s dynamic – Growing up, Starscream was always a favorite of mine. He can hold his own, but will run away when he needs to. He bailed on Megatron at the end of the first movie so he could seize his opportunity to become the new leader of the Decepticons. Even knowing that, when Megatron gets beaten, the first thing he does is call for Starscream. He appears and offers Megatron a few words of wisdom. “Not to call you a coward, master, but sometimes, cowards do survive…” Perfect.

(Editors note: this could turn into a very long list. I’m going to focus on the really, really bad aspects so this column doesn’t turn into a novel. But believe me, there’s a lot that belongs on this list that I’m not going to include. The plot was bad. The roommate was bad. Even Agent Simmons was bad, and I love John Turturro. The list goes on. But I’m going to focus on the worst of the worst. Can’t wait to read on, can you?) 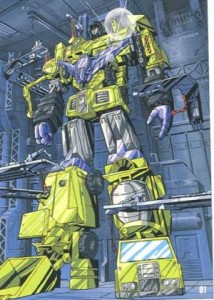 1.) Devastator – This was just a wasted opportunity. He (they) should have been the main villain of a story, with a strong buildup throughout the movie. Have them be formidable opponents on their own, and after facing a very tough fight, only then have them resort to combining their forces. I’d rather Devastator be standing upright, which to me seems more intimidating, and not on all fours like an animal. But hey, if he was done right I could even live with that. And most importantly, once they do finally form Devastator, DON’T HAVE HIM EASILY KILLED BY THE BIGGEST JOKE IN THE MOVIE. Speaking of…..

2.) Skids and Mudflap – Let me repeat that. Skids. And Mudflap. Seriously, they were named Skids. And. Mudflap. And they were awful. Two comic relief characters that weren’t funny. No one took them seriously in the audience or in the film. At one point Bumblebee picked them both up, one in each hand, and tossed them aside like they were rag dolls. Soon after, one of them single handedly destroys Devastator? Okay. Makes sense. I won’t harp on these guys, because if you saw the movie, you already know. They sucked.

3.) Sam’s parents – Well, mostly his mom. Any scene they were in was brutal. Like, roll your eyes and check your watch brutal. The brownie scene? Horrible. I cannot believe not one person stood up and said, hey, maybe we should cut that. All it would have taken was one person to speak up. ONE PERSON!!

4.) Too many new, undeveloped characters – Did you know this guy…. 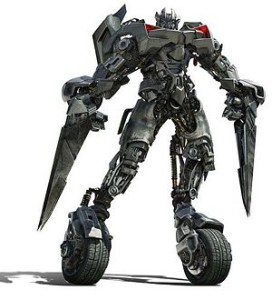 was named Sideswipe? I think they do mention it, but how much dialog did he get? They did such a good job of introducing each Autobot in the first movie, featuring only a small number and making them different enough that we could recognize them by their characteristics. They introduce A TON of robots here on both sides that don’t have names, or any type of character traits, or anything that separates them from the rest. You were bummed out when Jazz died at the end of the first movie. Would you have even noticed if Sideswipe died? Or, even better, remember this Autobot? 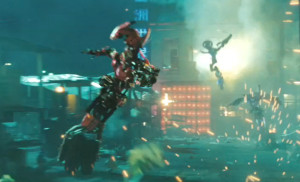 Her name was Arcee. Bet you were fighting back the tears when she got shot, weren’t you?

As I said, the universe was established, their backstory was told, and their fight had already begun. This movie could have, and should have been much better than it was. I know that the writer’s strike in 2007-08 had a big impact on the script, and I’m sure the studio didn’t help in wanting them to hit their targeted release date. Still, someone should have read the script, or seen the rough cut, and conceded that this one still needed some work. I really enjoyed the first movie, and Dark of the Moon was a vast improvement. But if you are discussing the Transformers, it’s better to pretend Revenge of the Fallen never happened.