When Edgar Wright left Marvel’s Ant-Man I will admit that I lost a great deal of interest in the movie. Then the teaser was released and I found it to be horribly underwhelming so my interest wained even more.

Regardless, despite my apathy , I still have hope for the film.

I love Paul Rudd as Scott Lang and Michael Douglass at Pym is also a perfect choice. Peyton Reed, who replaced Wright a director, has not done anything really to excite me, but as of this moment none of the directors within the Marvel Cinematic Universe has really got me as excited as Wright (Yes, even Branagh and Black).

That, happily, is all about to change.

Superherohype.com just released the first picture of Ant-Man’s antagonist Yellowjacket, who will be played respectfully by Corey Stall and I will say that for the first time since Wright’s departure, I feel a ping of excitement, which is good since this movie is set to be released July 17th.

Check the picture out and let me know what you think. 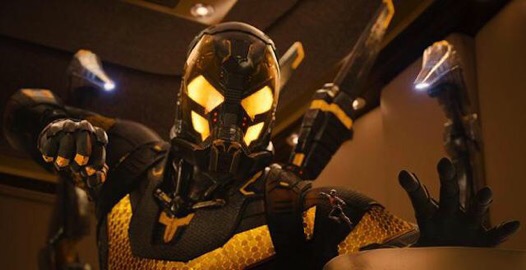 Not much is shown, but it still looks pretty awesome. Hopefully he will look even better during the actual film and hopefully Reed has the skills to make his battles with Ant-Man epic. Let’s keep our fingers crossed.

Ant-Man is again scheduled to be released July 15th