Apparently the sports-hotbed that is Cincinnati, Ohio, is just too much for Reds manager Bryan Price to handle. After being asked about the availability of his All Star catcher, Price went on a top-notch rant which, according to Awful Announcing, included 77 F-bombs. SEVENTY SEVEN. It was mesmerizing and captivating, and I had to listen to it twice to let it all sink in. Quite a bit to process in a short amount of time. 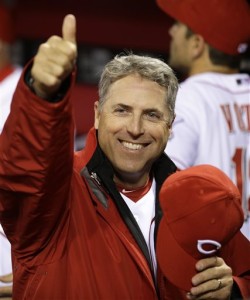 In short, Price was upset that the reporters were, well, reporting. In Price’s mind, a reporter should not question why one of a team’s best players is not available, and they should not REPORT that said player is not available to play. It doesn’t benefit the Reds for their opponents to know if a someone is going to play or not, by Price’s logic. The writers don’t have to be Reds’ fans, he reasons, but they shouldn’t be aiding the other team by providing intel. Some of my favorite quotes, courtesy of C. Trent Rosencrans of the Cincinnati Enquirer:

“I don’t understand what the importance is for everybody to know if we have a player that’s not here. We don’t benefit from the other teams knowing we don’t have a player. It does — you don’t have to be a Reds fan, but it doesn’t help us if our opponents know who is here and who isn’t. That’s what I want to know.”

Sniffing out “every f****** thing about the Reds and f’****** putting it out there” is, in fact, exactly what the writers’ job consists of. Again, it’s called REPORTING. I understand that Price was frustrated and venting, but his rationale is comical. Beat writers are basically a voice for the general public. Loyal Reds fans do not have access to ask Bryan Price questions, but you can be certain they were wondering why Devin Mesoraco did not play. To not inquire about it would be negligent on the reporters part, and would anger their customers. Which, ironically, are also the Cincinnati Reds customers. They read the articles, they watch the team on TV, and they buy the tickets to go to the games. They have a right to know what is going on, and the media is their gateway to obtaining that knowledge.

I guess the pressure of the Cincinnati media is getting to Bryan Price. Can you imagine him trying to handle the media in New York, Boston, or Philadelphia? Cities that are notorious for relentless, badgering media members. It kind of bums me out that the Phillies weren’t able to hire him in 2013 as a pitching coach. That could have been an adventure. Anyway, a few more gems, courtesy again of C. Trent Rosencrans:

Check out Rosencrans’ article, where he transcribes the entire conversation, and listen to the audio here, courtesy Deadspin. Profanity is edited, but this still might be considered NSFW. You’ve been warned.

Take a deep breath, Bryan Price. It’s going to be a looooooong season.