Disclaimer: This will be a mostly spoiler free review. If you want to know nothing of the movie before going to see it, then I guess you should avoid. I won’t ruin any big secrets, but my opinion may give more than intended away. Viewer discretion is advised.

Marvel’s Cinematic Universe has been mostly flawless to this point. Thinking back each movie since the release of the original Iron Man in 2008, the only real misstep, in my opinion, was Iron Man 2. Though I enjoyed the movie to some extent I still remember that overwhelming feeling that Marvel’s vision for future movies hindered director John Favreau from telling the story that he truly wanted to tell.

Now five years and billions of dollars later I once again walked away with that sinking feeling that the story that was originally intended to be viewed was skewed to set up future franchises. Now, that doesn’t mean I didn’t enjoy this movie, I did, I just didn’t enjoy it nearly as much as I originally felt I would.

I won’t go into too much detail with regards to the story due to the fact that I do not want to spoil anything for anyone since the movie has not officially been released yet in the United States. What I plan on doing with this review is telling you how I feel about the movie’s plot and about the characters, both new and old, instead of focusing on specific events from that movie.

If that is okay with you, please read on.

If not, see you after you’ve seen it.

The Plot: The movie begins, shockingly, with a massive action sequence. It is always a pleasure to watch The Avengers in action, especially since we had not seen them all together since the first movie back in 2012. Since then we have seen all the major characters in their respective sequels (Iron Man 3, Thor: The Dark World, Captain America: The Winter Soldier). This opening action sequence of course sets the overall plot into motion which, in my opinion, is where the movie begins to fall apart.

It’s not that original.

In many ways, it is very reminiscent of the first movie: Bad guy arrives. Threatens the world. Tears the team apart. Team comes back together. Big end action sequence. Roll Credits. (Sorry if that ruined anything for you, but is that any different than the first one?) No sequel is ever truly original, but within the universe, again, apart from Iron Man 2, their sequels typically have improved over the original. Even Iron Man 3 improved over it’s predecessor. So, why didn’t this? Look back to my thoughts on Iron Man 2. It just doesn’t seem like they cared enough about the plot of this movie knowing that it would be a huge hit regardless. Instead I feel that the powers that be decided to instead use this movie to kick start future movies, which I do not like.

Okay, so the plot isn’t anything to write home about. What about the characters? They must rock, right?

Let’s focus on the characters groups.

Original: One of the best parts, in my opinion, of this movie was the development of Hawkeye and Black Widow. So far in this series these two characters, despite being members of The Avengers, have gone without any real character development.

This changes drastically in this movie and I loved it.

Hawkeye was completely ignored in the last Avengers movie which I read did not make Jeremy Renner very happy. This is not the case in this new movie. He is very flushed out and developed, and in many ways has some of the best lines.

Black Widow has been in a total of three Marvel movies and besides the fact that she was former KGB agent, not much is really know about her. Though I wouldn’t say a ton of information is given to us about her past, we are given some really important information that helps to develop her more and make her more of an interesting and vulnerable character. I loved it.

Besides those two, nothing really changes among the older crew, which is fine since they will have their own sequels soon enough.

New Characters: The Vision and Ultron are amazing additions to this series. I have always felt did Joss Whedon was a master at creating interesting villains. Apart from Loki, Ultron is the second best villain in the cinematic universe. He is horrifying, hilarious, and in an odd way extremely heartfelt. I won’t give anything away but there is one moment where I was taken aback by a reaction he has towards another character. At that moment and in that situation it was not expected by him and I thought that said a great deal about his character (ask me after you view and I will tell you).

The Vision is sadly introduced three quarters of the way through the story. While the time we have with him may be brief, Whedon is skilled enough to make up understand his motives and understand him as a living being. I am certain he will be further examined in future movies, though I will not deny the fact that I wanted more of him in this movie. Oh, well.

This movie also introduces another two members to the Avengers team: Quicksilver and the Scarlet Witch. Like in 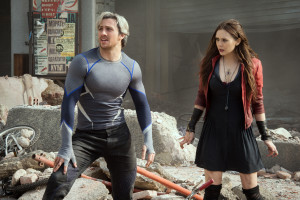 the first avengers movie, these two characters are essentially Hawkeye and Black Widow to the fact that they are really not developed at all.

Apart from a tirade by Quicksilver  we really don’t understand much about their background at all. His monologue gives just enough to give them purpose but not enough to really make me care about either of them. Their powers are awesome. Scarlet Witch is fantastic, but I felt Quicksilver was better depicted in Days of Futures Past. While both characters’ abilities are depicted in a very similar fashion, their personalities are vastly different. Putting it simply, I just liked the other version better. Hopefully future movies will also develop these characters further.

I hope at this point you see a pattern and a reoccurring theme forming with my review.

Everything I enjoyed is only partially enjoyed because none of it is ever fully developed. This movie is just the start of phase 3 of the cinematic universe where the original Avengers movie was the end of phase 1.

This movies’ purpose is only to set things up for future movies and I do not like that one bit.

I have paid my dues up into this point. I have watched every Marvel movie released with the hopes of an awesome payoff like I did with The Avengers. The individual movies, I thought, set up the universe and characters within the universe. This movie should have been some form of a payoff for our devotion to their story, not another step to develop future movies. I should not have walked out of this movie feeling a sense of being unfulfilled. I should have walked out completely satisfied and content and I wasn’t. Now all I’m thinking about is “Well they’ll develop them more later on” and I do not like that one bit.

Avengers: Age of Ultron is a fine movie. It has tons of action and humor, some great character development, but ultimately it leaves you wanting more, and not in a good way.