Ever since Marvel and Netflix announced that they were bringing Daredevil into the Marvel Cinematic Universe, I have been anxious to see it. The character needed a reboot in the worst way, and it would take a conscious effort to undo the damage that had been done by Ben Affleck (you know, Batman these days. HA) way, way back in 2003. I’ll admit that I went to see it in the theaters. I’ll admit that I tried to justify that it wasn’t THAT bad. I’ll admit that at the time, I defended it as not being ‘terrible’.

Looking back, I was wrong. So. Wrong.

I think I just didn’t want to admit that such a cool hero with such a cool story could be showcased in something so…. bad. Do we really need to discuss that disaster any further? Let’s leave the memories alone.

I am three episodes into season one of Daredevil, and I am hooked. If you take everything wrong with the 2003 film, and completely reversed them, you would have the current series. You would have REDEMPTION! So let’s discuss the new Netflix series! Let me make one thing perfectly clear: I will not spoil anything. If you haven’t seen it, seriously, do yourself a favor and at least check out the first couple of episodes. You can thank me later.

NOT A SUPERHERO FAN?? THATS OKAY!!

What makes Daredevil such an interesting character is that he has no super powers. He’s just a ‘regular guy.’ Sure, hes a brilliant lawyer who is well-trained in hand-to-hand combat. Oh, and he’s blind. But he has no super strength, no mystical powers, and the story is told in a way that you are constantly reminded of this. When he takes on a group of bad guys, you will notice him catching his breath when there is a small break in the action. He will punch a guy in the face, really, really hard. Several times. And guess what? That guy is getting back up for more. Other superhero stories have had realistic fight scenes, but Daredevil takes it one step further. He is exhausted by the end of the tussle, as he should be! He is often evenly matched, and at one point (VERY MINOR SPOILER BUT IF YOU WANT TO AVOID IT SKIP TO THE NEXT PARAGRAPH) he is beaten, bloodied, and left for dead in an alley dumpster. Oh no!

This is more than just a stereotypical superhero story. He isn’t fighting overpowered super villains (at least not yet), and he isn’t thwarting plots to destroy the world. This is one man, one ‘masked vigilante’, saving potential rape victims and shutting down human trafficking rings in Hell’s Kitchen. He is trying desperately to clean up ‘HIS CITY’, both by day as a defense attorney, and at night as a masked man. His story somewhat parallels Batman, if you subtract the substantial wealth and the eyesight. Actually, I was reminded of Batman Begins several times, from the fight scene in the shipyard, to Daredevil screaming, “WHERE IS HE?” in a bad guys’ face, except you could understand him when he said it. 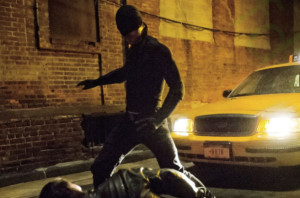 In case you aren’t familiar with Daredevil, his blindness has strengthened his other scenes, to a point where he can ‘see’ based on sound. And how they convey this idea in the show is brilliant. In the middle of a fight, the camera will slow and you will hear the faint sound of a thug picking up a shard of glass from the ground. That slight sound is suddenly amplified and Daredevil knows that an attempt to stab him is coming. During another fight, he hears a gun being cocked several feet away, and quickly grabs another criminal and pulls him in between as a human shield. Seeing as the audience what is happening but hearing it all happen from his point of view is a very cool concept and it is done very well. I almost wish they did it more often, but it’s probably a good thing that they aren’t driving it into the ground and killing the ‘specialness’ of it.

THE CASTING IS SOLID

I liked Charlie Cox in Boardwalk Empire, and it’s taking a bit to get used to his “American accent’, but he is very good as Matt Murdock, and even better as Daredevil. I know his first outfit is supposed to be ‘lame’ in comparison to the final product, but I think it’s kind of totally badass. It is simple, but it serves the purpose. And I am excited to see the evolution as the suit progresses along with the series.

I was just introduced to Wilson Fisk at the end of episode 3 (FINALLY!!) and as soon as I saw him, I said, yep, that’s Kingpin. One quick side note; the reveal shot of when you FINALLY get to see him is very well done. That’s all I will say. They build him up for three episodes and then BAM. It’s Kingpin. And it’s magic.

Foggy is awkward and funny and wonderful. He was Fulton Reed for crying out loud! He has great chemistry with Matt Murdock and as long time friends turned business partners, they play off each other perfectly. Rosario Dawson has only been in one episode so far, but she was fantastic as she always is. Deborah Ann Woll has been great in her role as well, and she will play a huge part in the story as the series progresses. They even have the Warden from Shawshank Redemption playing a bad guy!! You don’t want to miss that! 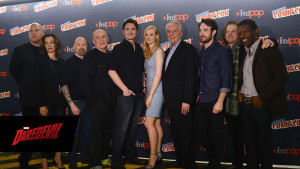 IT’S NOT ON NETWORK TV FOR A REASON

When it was announced that the series would be on Netflix rather than ABC, it was assumed that Marvel would have a little more flexibility in what they could air. I was a bit skeptical they would take full advantage of this, since at the end of the day they are still owned by Disney. I’m very happy to admit that I was wrong.

In addition to the occasional cuss word (GASP), this show just feels ‘real’. Remember earlier when I mentioned how realistic the fight scenes were?? You will see guys getting their arms broken, people being stabbed in the chest, neck, and even the head. Daredevil doesn’t kill, but he isn’t afraid to slice people open or hang them from the rooftop to get the information he needs. It’s very easy to get lost in the moment, to feel even for just one second that the good guy might not win this time. The unpredictably keeps you rooting for the hero, but most importantly, it keeps you wanting to find out what happens next.

I will check back in when I have some time to knock out more episodes, but in the meantime, give it a look! I really think Daredevil is worth your time. If you have Netflix, check out an episode or two and let me know what you think!! Leave a comment below or hit me on Twitter @LawrenceMonaco @StraightDupe