A high profile baseball player gets caught using a performance enhancing drug??? STOP THE PRESSES!!! We can now add Ryan Braun, former MVP and outfielder for the Milwaukee Brewers, to the ever-expanding list of athletes forever tainted with the label of ‘cheater.’ I feel like I have gotten numb to this type of news, but for some reason the Braun story struck a nerve with me. 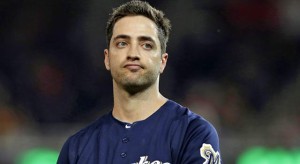 I am not naïve. I know that tons of players have used PEDs, a ton of players got away with it, a ton of players still use, and a ton of players continue to evade prosecution. Did it bother me when Melky Cabrera was suspended last year? Not necessarily. Can you blame Bartolo Colon for trying to continue his career at age 40? Not really. Do you think I lost sleep when Manny Ramirez decided to retire rather than face a 100 game suspension for his second failed test? Hard to believe, but not a wink.

So why attack Ryan Braun for doing what so many others have done before him? Why make him out to be the villain when many more will do the same in the future? How can you speak out against him when your favorite team has almost certainly had at least one tainted player associated with them by now? It’s easy. Ryan Braun is a dirty, stinking, selfish, scumbag liar. Oh, and a cheater. But the scumbag thing makes it worse.

Put yourself in Ryan Braun’s shoes. You know you did something wrong, and you know you got away with it thanks to a technicality. And let’s get one thing straight; I do not blame him one bit for refusing to admit it. This is America. Getting out of a speeding ticket on a technicality is part of what makes this country so great. He had a chance to get away with it, and he took it. No ill feelings from me, that’s why the system is set up the way it is. I don’t even fault him for using in the first place. Not that I agree with it, but in today’s landscape, it’s so commonplace that its hard to get fired up about anymore.

My issue with Ryan Braun was how he handled himself after winning his appeal. If you do something wrong, know you did something wrong, and still get away with it, you approach it humbly, professionally, and take special care to NOT SAY ANYTHING THAT COULD COME BACK TO HAUNT YOU DOWN THE ROAD. Following my speeding ticket example, you don’t stand on the courtroom steps, criticize the judge, question the judicial system, throw personal attacks at the cop involved in your case, and tell the TV cameras that you were victimized. You consider yourself lucky to be given a freebee, and you get on with your life.

If you are Ryan Braun back in February of 2012, you keep it short and simple. Thank the Player’s Union for helping you clear your name. Thank your fans and your family for their support through a difficult time. Say that you are glad your name has been cleared and the process is over. Say how excited you are to get on with the sport you love and you won’t be answering any questions about the process once this is over. When the question comes, “Did you use steroids?”, you simply say, “No.” And you are done. What did Ryan Braun decide to do instead??

Ryan Braun decided to have a press conference on February 24, 2012, in which he decided to blame the collector of his sample, and insinuate that this man tampered with his urine. Knowing he was guilty and given a gift to get away with it, Braun instead attacked an innocent man, got him fired from his job, and told everyone that poor Ryan Braun was the victim. He went above and beyond with his denial, piled on when it was completely unnecessary, attacked the testing process, attacked Major League Baseball, and looking back on it today, came off as, well, a dirty, stinking, selfish, scumbag liar.

Here’s a clip of the first six minutes of his press conference after winning his appeal. Watch this and remember that he KNEW he was guilty as he said every word of this.

He pretty much approached it exactly how he should have for the first 1:40 of the clip. He should have stopped there and left it at that. But no, he kept going. He immediately follows up with this gem of a quote (1:41 – 1:59)

“If I had done this intentionally or unintentionally, I’d be the first one to step up and say, ‘I did it’. By no means am I perfect, but if I’ve ever made any mistakes in my life I’ve taken responsibility for my actions. I truly believe in my heart, and I would bet my life that this substance never entered my body at any point.”

Bet your life on it? Just like Aaron Rodgers bet his salary that you were telling the truth? Way to drag your friends down with you, Ryan. And instead of being grateful that you got away with doing something wrong, you take it above and beyond and give us quote after quote that the public can now use against you when they find out you were knowingly lying all along.

I could pick this press conference apart, but I will leave it to you to form your own opinion. I will make note of his attacks on Dino Laurenzi, flat out accusing him of tampering with Braun’s sample. Again, he knew he was wrong. Instead of walking away quietly, he chose to paint himself as a victim and pass the blame to a man HE KNEW WAS INNOCENT.

If you can watch that video and still give him a pass, knowing what we know now, then you are either a Brewers fan, or a scumbag yourself. Or both! As sarcasm does not always translate, let me make a quick note that I am kidding. Everyone is entitled to their opinion and if you disagree with me, more power to you. I just feel like he could have handled the entire appeal victory much better last February, and I am glad that it is finally coming back to bite him today.

Because I would hate to end this on a down note, and this is too good to not share, lets enjoy the always entertaining NMA animation of Ryan Braun’s suspension. My favorite part is post-steroid Braun struggling to lift a bat. Classic.