I’m a fan of horror movies. That being said, I’m not a horror movie buff – I wouldn’t be able to name drop the directors of even some of the most well known horror movies. To put it simply, I LOVE being scared. There are definitely certain, I guess you could call them elements, that tend to really get under my skin in a good horror movie. Fountains of blood, wearing the face of someone who’s just been sliced up, the cutting off of limbs – Adam craves NOT these things. Funny thing though, I know the things that don’t really scare me, but it’s hard to pin-point what it is about certain movies that accomplish the job successfully. I’ve always said that eye contact is one thing that scares the s**t out of me. That moment when the creature, or ghost looks right into a character’s eyes (or your eyes, say on a haunted hayride or house) is enough to cause every hair on my body to stand up. Also, seeing genuine, paralyzing horror on someone’s face who clearly sees something that we do not – gets me every time. A good mix of these elements, as well as strategically placed door creaks, floating shadows, moaning/crying and whispering and you’ve got yourself a terrifying tale to tell.

After seeing James Wan’s Insidious, which was a very pleasant surprise, I expected another pleasant surprise with his take on the tired haunted house genre. He delivers. What makes Wan’s The Conjuring so effective, in my opinion, are his conscious choices to hold back just when you think things are about to get out of control. He keeps pulling back just enough to create this un-Godly tension which lasts throughout the entire film right up until the credits roll. Simple hand-claps rendered my whole body rigid, and on the edge of my seat. Sure, there are definitely some cheap scares that, although you can sense them coming, still manage (embarrassingly) to cause you to jump out of your seat. But, it’s the moments in between those scares that really separate this film from so many other carbon-copy horror films. When you see Vera Farmiga doubled over after she sees glimpses of “something bad” that happened, well your 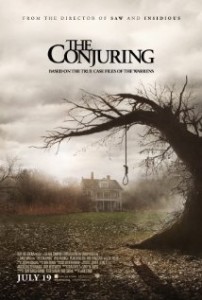 imagination takes hold which is worse than any image that could possibly be portrayed on screen. When you watch nervously as a young girl stares in tears at one corner of her room that is shrouded in darkness, only to reveal that whatever it is that she sees is making murderous threats against her family…well…I can only imagine what this thing looks like and what it sounds like. The fear of the unknown is what really makes this movie tick. Yes, the haunted house movie has been done so many times that you’d think that there could not possibly be any originality left within the genre. You would be wrong in this case.

The casting of Patrick Wilson and Vera Farmiga as real-life paranormal researchers, Ed and Lorraine Warren, was definitely a wise choice. I thoroughly enjoyed the parallel narratives of the Warrens and the family of the house. It was a nice touch to throw in some background on the Warrens and their husband & wife career as explorers of the supernatural and unknown. It adds a depth to the later scenes in the actual house that could otherwise have fallen flat. Instead, we see two grounded people who love each-other, coming face to face with unspeakable things. Also, another choice that Wan makes that seems to work well is his choice to really convey just how grounded the Warrens are. It does not feel like it does whenever we watch reality shows or films where mediums are invited to scope out a supposedly haunted place. You always feel like this medium is going into it already believing that the place is haunted, or at least wanting it to be so. This is not the case here. Quite the opposite actually. The Warrens clearly chose this profession (in part to Lorraine being a gifted medium) in order to help people. They never show signs of that a-typical horror movie character who just can’t wait to catch a glimpse of his or her first ghostly encounter. Wan makes sure to depict them as a normal, er, (para)normal (see what I did there?) couple who actually appear to struggle under the weight of things they have seen and experiences they have had. Those past experiences are only alluded to, leaving the audience to ponder just how awful these experiences could have been.

The family that is haunted was also well cast. None of the kids are over-the-top, and Lily Taylor and Ron Livingston both hold their own and serve their purpose well as the tough-but-caring father and loving mother. I could not help but wince when one of these characters finds themselves locked in the dark with only a box of matches and unbearable silence. I know, these all sound like cliches (and they are) but just done so well, with such taste. Again, Wan takes such care in only pulling the curtain back a little at a time, finding the true terror in the things we do not see. Think Haley Joel Osment in The 6th Sense when he gets trapped in a crawlspace at a birthday party – when we are only allowed to hear the sounds of screaming, voices and scratching coming from within. That is where Wan finds the sweet spot. And he uses moments similar to this sporadically throughout the film to build the tension that pushes the movie (and the audience) to the absolute breaking point. And for that, I say, thank you Mr. Wan. Well done. It goes without saying that I am quite excited for Insidious Chapter 2.